The Superintendent and I were on location last week in preparation for the scenery phase of the Flagstaff Subdivision.

I’m a freelance modeler, so all I really want to do is make the Flagstaff portion of the layout kinda feel like the real thing. I’m not worried about duplicating trackwork or buildings down to the finest detail.

Which is good, because when you’re traveling with a six-year-old there’s little exploring and no measuring going on. I got about 45 minutes to take pictures and scoop up some dirt before I was reminded that the real reason we were there was to go to Bearizona just up the road.

But I figured this much out:

I want to model the depot.

It’s an attractive building that will look good with the Many Lost Ways steam shuttle docked out front. I hope I can find a kit to approximate it. Otherwise I’ll build a placeholder while I scratchbuild one, which I will get around to never.

About a block away from the depot was this giant collage of road signs. I don’t have much room on the Flagstaff Sub for roads, but this thing is situated on the opposite side of the sidewalk from the road.

I think I’ll model the sidewalk and curb against the edge of the layout and put the signs between that and the track. That will clearly convey the intended geography to viewers.

As I noted above, the Superintendent and I collected about three quarts of dirt in various colors from several locations near the BNSF mainline that runs through Flagstaff. I’ll sift it on the layout for ground cover and secure it with diluted white glue. That, along with referencing pictures of the topography and foliage, should help me give the scene a realistic “Flagstaff feel.” 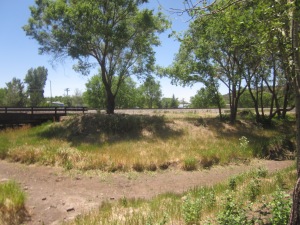 Okay? Now let’s go look at some bear cubs before you pee your pants. 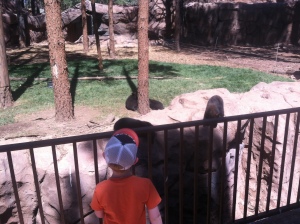 One thought on “Flagstaff Field Work (With a Six-Year-Old)”