When we left off last week, the Flagstaff local had just arrived in Salvation Point, and the yard crew was sorting out the freight.

Now the yard crew has assembled another challenging local job, Train SPH21, which switches the local industries in Salvation Point as well as Red Earth Co-op in Herbst Junction.

The Red Earth Co-op siding faces west, so a locomotive pulling cars from Salvation Point would need to perform a runaround maneuver to pick up and spot cars. The passing siding at Herbst Junction can accommodate no more than three cars, so to work the co-op the train has to be pushed from Salvation Point. This is a long push move on the main line, so a caboose is employed to protect the train. It’s not really necessary, but I like a caboose now and then and it adds a little complexity to the work.

There are two industries in Salvation Point. Paul Power’s spur faces east while Midtown Construction Materials faces west. The train is blocked with the Paul Power work on the west end and Midtown’s cars to the east.

The crew runs the locomotive around on the passing siding and couples on to the caboose, shoves the train up to Midtown and switches the inbounds and outbounds. 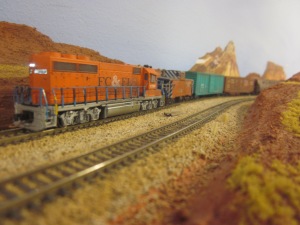 The locomotive is run around to the east end of the train again at the passing siding, and backed down to Paul Power to work the traffic there. 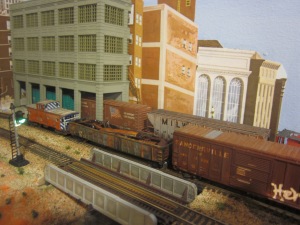 The train is reassembled and the caboose leads the way down into the Benjamin Henry Canyon.

At Herbst Junction, the crew works the Red Earth Co-op spur. Any loads bound for Globe are spotted on the short siding by the depot.

This Red Earth Co-op hopper (with patches) is bound for Globe. Rather than haul it to Salvation Point, it is spotted in Herbst Junction for the Globe Local to grab later.

The train is reassembled and the crew returns to Salvation Point in time for lunch.

Next week: The Globe and Gallup locals, and the end of a long day on the job.

One thought on “Operating the FCFL: Salvation Point Industries and Herbst Junction”