Last week train DSPP10 dropped a string of cars at Salvation Point on its way to Phoenix (AKA Southwest Staging). This week the Salvation Point yard crew gets to work sorting those cars and building the “local” trains that will deliver them to cities and industries across the layout.

The busiest locomotive in the fleet is the MP1500DC switcher assigned to Salvation Point Yard. The yard crew cuts apart the string of cars left behind by the Phoenix-bound DSPP10, and sorts them by destination: Flagstaff, Salvation Point industries, Herbst Junction, Gallup, Globe. The crew then builds the local trains that will work those destinations.

The first local on the schedule is the Flagstaff turn, Train SPF11. Flagstaff presents some challenging switching, with industrial spurs facing east and west. Just getting to Flagstaff from Salvation Point requires the train to reverse direction. To help the crew manage it all efficiently, SPF11 is built with a locomotive at each end. Here is where Digital Command Control (DCC) is essential.

With the Flagstaff cars sorted, the power is brought from the hostler track. The locomotives are cut apart, with one placed on each end of the train:

Engine 5601 (DCC address 56) and 5630 (address 30) are set up for multiple unit operation. While in a “consist” like this, both units respond to the same throttle commands.

The consist is broken, allowing the engines to operate independently.

The locomotives are cut apart, and one is sent down the line to be on the head end of the train. 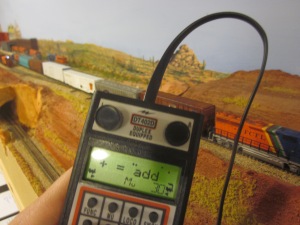 The other locomotive pulls the Flagstaff cars from the yard and shoves them up to couple with the first locomotive. The consist is re-established and the train is ready to roll.

The train heads east, downhill into the Benjamin-Henry Canyon and pulls up short of the crossover at Herbst Junction.

The crew selects the diverging route and pulls clear of the turnout on the branch line.

Taking up residence in the locomotive now facing west, the crew throttles up and heads through The Cell into the longest tunnel on the FCFL.

With the inbound cars all spotted and the outbound cars all pulled, the train is assembled with a locomotive on each end for the trip home.

The reverse move at Herbst Junction is repeated, and the train finally arrives back in Salvation Point.

Next Week: We work the local industries in Salvation Point and make a run to Herbst Junction.

One thought on “Operating the FCFL: Salvation Point Yard and the Flagstaff Local”