The grumble of the big Mercury outboard pierced the quiet of the canyon and rattled across the rock walls. TJ winced and pulled the throttle back, admonishing himself for making the same rookie mistake again. This was the hardest part of the trip, backing from the dock then circling across the current before shooting the narrow gap between the pilings that supported the FCFL’s twin railroad bridges. 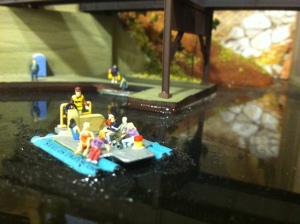 This was the hardest part of the trip, backing from the dock then circling across the current before shooting the narrow gap between the pilings that supported the FCFL’s twin railroad bridges.

The raft was seventeen feet long, four large inflatable pontoons lashed in pairs with a steel deck between, eighteen aboard for the “smooth water” tour of Many Lost Ways National Park. It was hard to bring the bulky craft about in the current without gunning the engine. The seasoned guides who belonged on the river had a touch. The rookies – the parentally subsidized future MBAs who came to gather a summer’s worth of tall tales–always goosed the throttle as he’d just done. He vowed to develop the finesse.

“So, I don’t know where your guide is,” he said to the group , after he had the raft comfortably pointed upstream. “They just gave me a life jacket and some keys and said ‘go for it.’”

It wasn’t his joke. He didn’t remember who he’d stolen it from, and he was sure whoever that was had stolen it from someone else. But it was a good icebreaker and set the tone for the four-hour trip. He delivered all of his jokes the same way – deadpan, no eye contact, no smile. He would pick out a spot on the riverbank and coolly watch it go by while his passengers laughed. But their eyes were on him, and what they saw was the confidence and cool of someone who had traded their stress-filled, keep-up-with-the-Joneses, suburban world for a rugged, independent life on the river. The more he acted like that, he hoped, the more it would come true.

“How do you hide a twenty-dollar bill from a river guide?” he said, this time nodding to a spot on the bank where, on cue, a blue heron touched down in the tall grass.

“Hide it under a bar of soap.”

He went on to explain that their departure was from the exact spot where some 200 years earlier Captain Benjamin-Henry had landed, the first white man to come to Many Lost Ways. How the Captain had established a settlement a few miles downstream at Salvation Point. How the Captain’s son, Michael, had been crucial to forging peace with the Navajo, and how despite harsh winters and dry summers the settlement flourished. Then he nodded to the Benjamin-Henry bridge, now high overhead, and told how the Four Corners Railway had been established to carry timber and minerals from the land, but later established the park and brought tourists instead. How today’s FCFL Transportation, the rail giant, still held the land sacred and stood as a bulwark against developers.

“How do you hide a fifty-dollar bill from a river guide?”

This was a good group. Families, some with teenagers who wished the cell signal was better, some younger kids not yet aware how uncool it was to get excited about wildlife. One wanna-be granola couple wearing the entire North Face catalogue. Four college kids flirting and taking pictures of each other while their fifth wheel nursed an obvious hangover. They would laugh at his jokes, participate in the usual gags, ask easy questions, and probably tip alright.

The smooth water trip on the Benjamin-Henry River was a popular option. It took half a day and gave visitors a chance to experience the Many Lost Ways backcountry without an arduous hike. TJ would prefer to lead the more adventurous white water trips, but that was for experienced guides. He would get there in time. For now he was grateful to earn a few bucks rafting through extraordinary country.

TJ’s raft was one of four on the trip today, a loose flotilla snaking along the canyon, slowing to point out wildlife or favorite rock formations, spinning in the current, all the while the guides slinging playful jabs at each other to the delight of their guests. They settled in to a rhythm of easy banter, tidbits of history and nature, and “where are you from” exchanges.” The Mercury drummed along, lulling the group into a mellow silence.

“OK guys here’s what we’re going to do,” TJ announced, backing the outboard to an idle and letting the other rafts disappear behind a towering vermillion cliff. “When we go by, I want everybody to point up to the right. We’ll see if we can get the others to look. Ready?”

He brought the raft back to speed and pointed to a spot at the top of the cliff, and the passengers joined him in unison. A mom from Salt Lake City gasped for effect. As TJ expected, when the other rafts came into view, every passenger was pointing the opposite way, to the sky over the left bank. It was a choreographed gag the guides pulled on every trip. There was the usual chorus of playful boos from his boat, but as he passed the next raft and grinned at the guide, Phil, he saw astonishment and fear. TJ followed Phil’s gaze skyward just in time to see a small, twin-engine plane speeding toward the ground, smoke belching from the fuselage. It was still high, so it wasn’t clear but he thought he saw something – or someone – tumbling away. A moment later, obscured from view by the canyon wall, came the crash. The column of smoke became visible to those on the river just before they heard the heart-wrenching sound.