A syrupy Tuesday in July – a blank square on the calendar except for the “Dad Home” jotted in the corner indicating it was my week to stay home with the boys and stay in our pajamas the entire time.

When I was a kid, days like this meant Legos and model trains all day. For the Conductor and the Superintendent, as I have lamented before, it means baseball in different media: Playstation, ESPN, Cards and finally, you know … baseball.

Mid-morning front yard baseball in your pajamas on a weekday is an exquisite privilege. But when it ran its course we lost our momentum and found ourselves face-to-face with a powerful stuff called Boredom.

Boredom comes in two forms, and I hate the one and love the other.

There’s the boredom of the cubicle, the assembly line, the math worksheet – a painful boredom without which Work would not be the punishment God intended.

Then there’s idle boredom, when there is really nothing to do.

This is useful stuff and frankly if we had more of it we might not be so far behind the Chinese in math and science. Necessity is the mother of invention but its father is boredom.

It was idle boredom that led the Superintendent to wander aimlessly into my workshop, where he happened upon a box of leftover roadbed and track from the construction of the Flagstaff Subdivision.

“Hey Dad, can we build a new layout?” 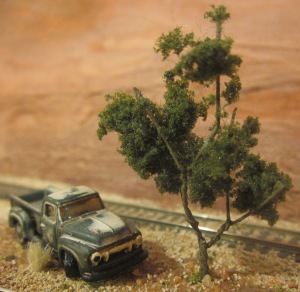 Big Roger thinks about the Last Time a lot since they moved him to the home.

The Last Time he used his table saw.

The Last Time he fired a rifle.

The Last Time he shuffled out to his own mailbox.

The Last Time with Mae.

The Last Time with Mae – gosh, when was that?

He’s not sure when the Last Time was for any of those things, he just knows they don’t happen anymore.

He remembers the Last Time he drove that pickup, though. It was in the ‘70s and his two oldest were canoeing and he set out to pick them up. He was cutting overland along the railroad tracks toward the river (people did that in those days, though the Last Time was awhile ago) and POW! – a ball joint let go and she went down on one knee like a wounded mule.

The truck was surplus by then, a Saturday beater he never much cared for anyway, so other priorities got in the way of retrieving it. The Last Time he seriously considered it was a weekend that same summer, when his brother offered to drive down from Kanab with his wrecker, but then there was a pileup on 89 and oh, brother made a bundle on the cleanup instead.

So the truck is there and he is here and he wonders, “When was the Last Time I could have gone down there and turned it over?”

The Ford wouldn’t have gone anywhere on its crippled suspension anyway. But he’s the same – a good motor in a ruined chassis – so the wondering is good for his mind:

When was the moment? The Last Time the bearings and gaskets and plugs were all still just good enough, it would’ve cranked and maybe sputtered but the old straight six would have caught, and then the next moment – just a moment’s more corrosion on the points maybe – it wouldn’t have?

That’s the funny thing about the Last Time, he thinks. You hardly ever know it.

When does a disabled truck become a derelict?

When does bread become toast?

When does a man become an old man and then become – well, what sort is he now?

Big Roger remembers when they were young Mae would run her fingers through his hair when she rode with him in that pickup. He loved that, but parenthood doesn’t leave much room for scooting over on the bench seat, so there was a Last Time for that, too, but he’s not sure when it was.

He thinks about a routine he had with the kids at bedtime. Sometimes he would carry them by the ankles and swing them upside down before sliding them under the covers and then one day – who knows when? – the littlest got too big. A giggling child curled up liking how Daddy did that, but it was the Last Time and no one knew it.

Trains are cool until they’re not, and when you’re six or eight years old the start of spring training seems to be the tipping point.

My help is gone, so the work of bringing the Flagstaff Subdivision to life has been solitary. Sure, The Conductor and The Superintendent swoop in between innings to make sure Dad is on task, but when they see wire and plywood instead of trees and locomotives, they’re off again.

No matter. It’s a little project in a little hallway and we’d be crawling over each other anyway. I’m content that The Conductor stuck with me long enough to learn some soldering, and The Superintendent tried his hand at the power drill.

Neither is an 11-foot-by-six-inch switching district, especially when your priority is to be Dad, and Dad is needed to Pitch.

Flagstaff is taking shape in fits of 30 or 40 minutes: the track plan in paper and pencil, the benchwork, the sub-roadbed, the frustrating search for Code 55 track. Then suddenly, last Saturday, a train rolled into town.

I called upstairs that I had an important moment to share with the family and would they please join me by the layout.

“After this at-bat,” they said.

The first train to arrive on the Flagstaff Sub was a short maintenance-of-way consist. To my delight it was greeted with applause (The Train Man’s Wife is a generous booster) and before it got underway The Conductor wanted to make sure it included a piece of rolling stock from his collection. A nice touch that assured me he still regards the FCFL with some admiration.

Nobody seemed to notice that, in order to give the long, skinny track plan some interest I built in grade separation between the mainline and the passing siding. (The main drops about 5/16-inch between the turnouts, while the siding is level.) 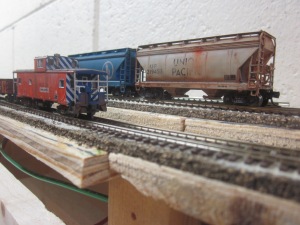 Nobody seemed to notice that to give the shallow scene some depth, I curved the mainline and angled most of the industrial spurs so there would be minimal track parallel to the fascia.

Nobody seemed to notice the powered turnout frogs, the hidden feeder wires every three feet, the Z-scale roadbed under the spurs to drop their grade a tiny bit and allow the ties to hang over the edges so when the track is ballasted it looks washed out and in need of maintenance.

Nobody noticed any of that, but it’s okay. They were there, and I think it was a hit.