Last week I wrote about the grade crossing with working lights The Superintendent and I added.

Electronics are not my thing. Ohm’s law? Amps versus volts? I don’t know what’s watt.

Thankfully the FCFL’s signals chief, AKA my Dad, is an electrical engineer. Here’s Dad on how we made the grade crossing lights work, with a bonus on an occupancy detector for a hidden stretch of track:

The FCFL Four Corners Division traverses sparsely populated areas of the Southwest. Given the long distances between stations with few crossings and relatively little vehicular traffic most of the division operates “dark,” that is without centralized traffic control or automatic block signals. Most of the rural grade crossings are protected by stop signs warning road traffic to watch out for trains. 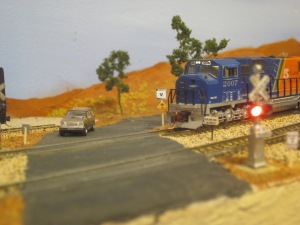 There are two ways to detect trains and actuate grade crossing signals. One is to detect the locomotive current. The other is to use photocells that detect the light change when the train passes over them.

Detecting locomotive current is simpler and doesn’t depend on room lighting for operation. However, the signal operation isn’t prototypical in that a long train may still be in the crossing when the locomotive exits the block and turns off the signals.

The photocell system provides more prototypical operation by starting the signals flashing before the train reaches the crossing and turning them off once the train is clear of the crossing.

Photocells are mounted between the rails and flush with the ties. When a train passes over the photocells, the grade crossing signals are triggered.

The Logic Rail Technologies Grade Crossing Pro was chosen for this application. The Grade Crossing Pro module uses four photocells, two on each side of the crossing to detect the train, and has outputs to drive the flashing lights as well as an output to drive a switch machine to actuate gates, although gates weren’t installed for this crossing.

One complication with this crossing is that there are two tracks and trains can be on either or both tracks at the same time and be moving in either direction.

The way to handle this situation is to use two Grade Crossing Pros.  One acts as a slave unit that only detects the train on it’s track and sends a signal to the master one to actuate the lights.

A DC power supply is needed for these units.  A Radio Shack 110 Volt AC to 12 Volt DC “wall wart” power supply was used to power the grade crossing electronics.

The signals work well, even when the crossing is the site of a meet between two trains:

Between Herbst Junction and the Flagstaff staging area there is a 25-foot stretch of track where the train isn’t visible. 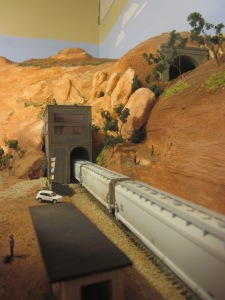 This headhouse is the eastern end of a 25-foot tunnel. A block detector was installed to alert operators when a train occupies the unseen trackage.

Automatic block signals were installed in this section to provide an indication that the block is occupied.

A Circuitron BD-2 Block Occupancy Detector was used to detect the train and drive the signal heads at each end of the block.  This is a self-contained unit for one block. It detects the train by sensing the current drawn by the locomotive when it is in the block and has outputs to drive the Occupied/Clear signal aspects.

A westbound train enters the tunnel, and the signal head indicates the block is occupied.

Twenty-five feet to the west, the train exits the hidden trackage, and the signals show all clear.

Beyond the block occupancy detector module, the signal heads, and about 50 scale miles of wire, the only requirement is the Radio Shack 12 volt supply used for the grade crossing signals.

There is a small voltage drop in the track power going through the occupancy detector.  To compensate, back to back diodes are connected in the power supply to the rest of the layout so there isn’t a sudden change in voltage as the locomotive enters or exits the block.