What’s a model railroad without a couple of hillbillies? Here’s how I transformed a “stock” Atlas Ford F150 into this jacked-up monster.

The project begins with disassembly of the stock model.

The body of the truck is conveniently molded in two pieces: the cab/front clip and the bed. To give the truck a more authentic “redneck” feel I sprayed the front half with gray primer and the back half “bomber tan.” Any drab, ugly colors will do. I then added a coat of dullcoat and finished with a wash of india ink and rubbing alcohol.

Next is the chassis work, which is what makes this model distinctive.

The stock wheels are easily removed by simply pulling the axle out of the molded pockets on the undercarriage. I then cut two lengths of Plastruct 3/64″ tee styrene strips to span from the front of the front axle pocket to the rear of the rear one. I glued these in place to create frame rails. 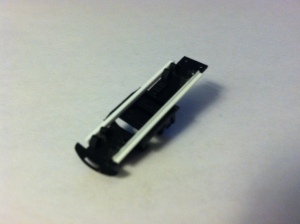 I then made four shock absorbers out of doorbell wire. I stripped about 1/16″ of insulation, cut another 1/8″ of wire above that, and repeated the process until I had a set of four.

Shock absorbers made from bits of wire.

I then used CA to glue the shocks into the axle pockets.

Next I made suspension arms with more of the tee styrene. Rather than measure, I simply found the middle of the frame rails, held one end of the strip there and cut where it met the bottom of the shock. I secured these in place with plastic cement at the frame rail and CA at the shock. I then used a round jeweler’s file to notch the bottom of the arms to accept the axles I made later. 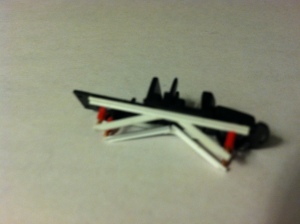 I painted the frame rails and suspension arms competition orange and set the chassis aside to dry.

While the suspension was drying, I made a transfer case from a small block of styrene. I drilled a 1/16″ hole in the center of one side, and another on the other side offset to the driver’s side. I then used CA to secure driveshafts made of wire, then secured the assembly to the undercarriage with plastic cement.

Transfer case and driveshafts in place.

I made the axles by cutting lengths of spare railing from an old engine service terminal kit. Any round styrene about 1/16″ in diameter will do. I cut two pieces to 5/8″ lengths.

I used the white metal cast rear wheels from two old straight truck models. I used white putty to fill in the groove between the dual wheels to make one wide tire. I then sanded them smooth and sprayed them with Pollyscale grimy black. When the paint dried, I drilled a hole into the center of the back of each wheel and secured them to the axles with CA. I then painted the rims flat black and put a dot of silver on the hubs.

Next I glued the axle/wheel assemblies to the ends of the suspension arms with plastic cement. I then bent the wire driveshafts to meet the axles and trimmed them to length. Then I used white putty to sculpt differential housings around the axles and driveshafts. When the putty dried I painted the housings black with silver covers.

A redneck pickup is not complete without rednecks, so I crafted Zig and Lerline from a couple of unpainted Model Power figures.

Zig was a hefty gentleman wearing a coat, tie, and for some reason a ball cap. I cut his torso just above the waist, then used a jeweler’s file to remove the molded clothing detail. I then carved a buddha belly and flabby chest. I filed his ball cap down to a bald head. I then mixed up a sunburn color with white and Rock Island Red and painted him, making sure to give his neck an extra coat. A few dabs of rail brown were added for a goatee and nipples.

Lerline was another odd Model Power figure of a chubby woman wearing a slinky dress. I trimmed her above the waist as well, then painted her with the sunburn color, brown hair, and a red bikini top. After the paint dried I glued Zig and Lerline into the seats molded in the chassis. 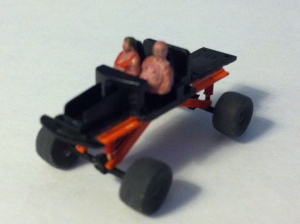 The stock window glazing would not fit above their heads, and I wanted the windows open anyway, so I trimmed the windshield and rear windows out of the glazing. I accidentally cracked the windshield, but I think that’s a happy accident.

Before final assembly, I used some more styrene tee strips to make a rugged-looking brush bumper, and glued it in place with plastic cement. Then I put the body back on and placed the model on the layout. 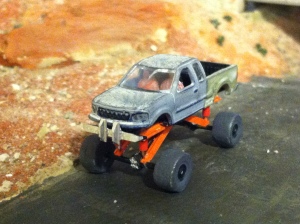 Heading out of Salvation Point for a day on the trails… Y’all.

Another time I might make a set of roll bars for the bed of the truck. I also might add a whip antenna, a flag, or a dog. Oversized mirrors and exhaust stacks would also be a nice touch. For now the model does a nice job helping establish Salvation Point as a recreational hub on the edge of the desert.